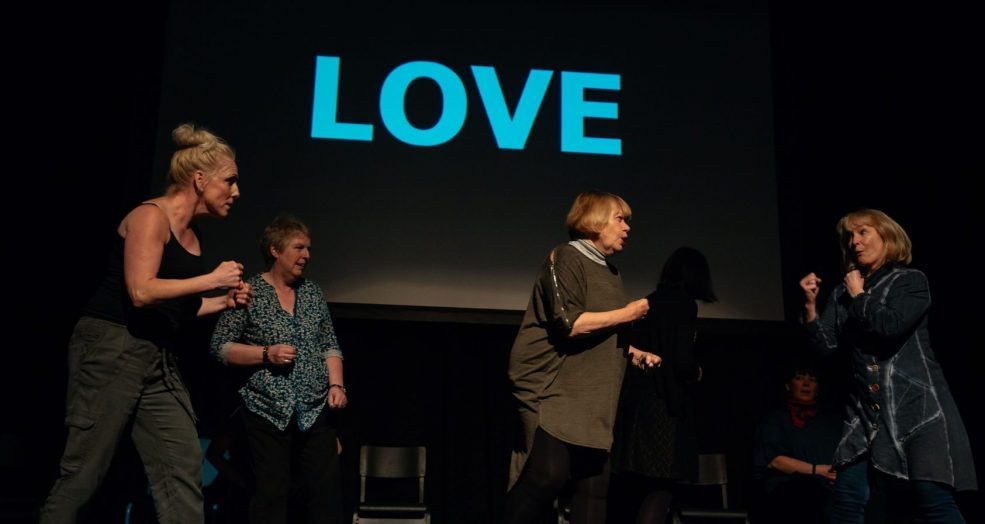 There are faults in the French I know, but it is written as the words flowed into my mind and does not ask to be corrected.  I feel proud of myself for having written it, and grateful for the Workshop that inspired it.

I had been invited to join the second group of The Flames, a creative experience for the over 50’s envisaged and developed by Tricky Hat under the guidance of Fiona Miller.  I had seen their first presentation last September and was keen to get involved.   I had no idea how it would help me, but help I needed after three years of loss, illness and re-assessment of the life I had known.

During the first ‘getting to know you’ session I was paired with Georgie, a vibrant, colourful and pretty lady who remembers upstaging a drag artist at a very posh event by wearing an identical glamourous evening dress.  We had to introduce ourselves with three facts, which could be true or false.  I said I was half French (partly true), a retired G.P. (false) and owned a red 2-seater car (very true).   Georgie then introduced me to the rest of the group as: ‘this exotic French woman with the dashing red sports car’.  Fiona’s response was immediate: “from now on, Pene, I would like you to speak only in French.  I don’t mind if it is correct or nonsense, but that is your remit”

So, I did.  It was supremely freeing, it was funny, and it connected me, in a way I can’t explain, to the work we were undertaking: Working on Memories.

This could have been seriously emotional and heavy, but was nothing of the kind.  Each member’s memory triggered one of our own in a fairly random fashion, so that they came out spontaneously and movingly, and with the extremely clever direction of our Mentor, and the support of three talented musicians, we were gently turned into an all-female performance group whose work was based on reality and personal experience, with a naivety of presentation giving the end product a creative rawness which was captivating for our audiences and totally rewarding for ourselves.

My poem was triggered by the death of my youngest daughter, followed by 5 senior members of my close family in 2014/15, and then that of a very dear friend this January.  I have learnt it by heart, and it springs readily into my mind at odd moments, like this evening, when I walked into the park as the light was fading to hear the last birdsongs of the night settling themselves into rest in the hope of a better tomorrow.

This is what The Flames and Tricky Hat have done for me, and I am so grateful.

And this is what I was trying to say:

What would I like to say to my younger self?
It would be:

Pay attention to the precious little moments of life:
The smile of your mother when she sings to you
The voice of your father when he tells you something important
The hands of your friends
The presents of aunts and uncles

We think these people will always be there.

But the years pass by, and we become independent, modern and take new friends.

Beware, Penelope
Because one day you might find yourself alone with only these memories