Catching Fire: A Flames Account of Joining the Company 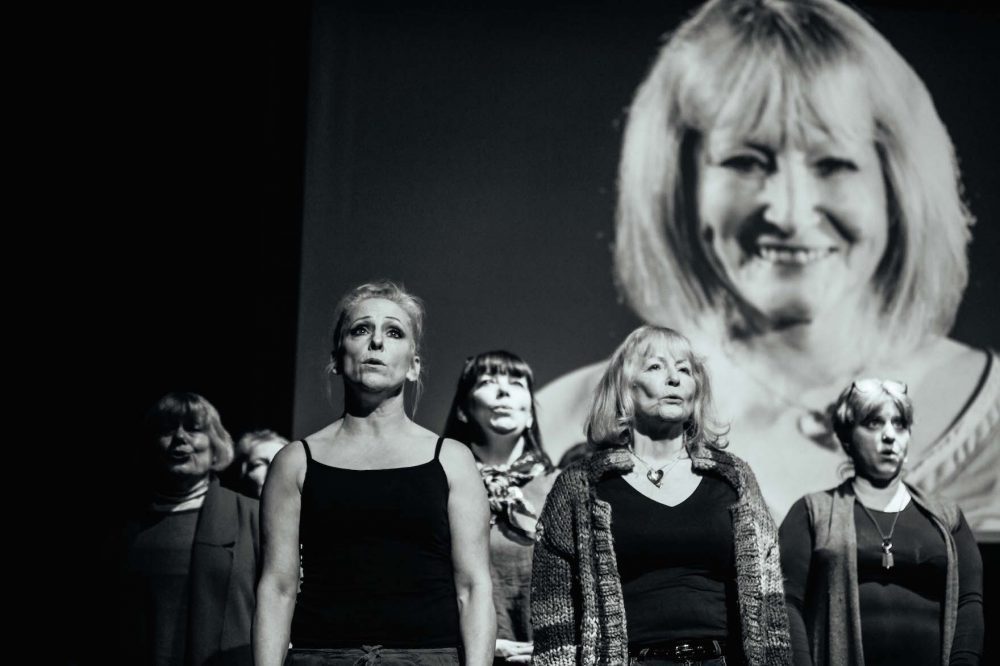 I would encourage anyone who is curious about what The Flames do to come along and participate. You will be inspired by everyone in the group and find out a bit about your own strengths too.

I believe that we made a unique piece of theatre that I am proud to have been part of – I absolutely trusted the artistic judgement of our director and the whole creative team. And if someone as angsty as me can be affected in a positive way by taking part, then it must surely be efficacious for all!

People were curious when I told them I was thinking about joining The Flames. Some of them assumed it was a Three Degrees tribute act, and skirted nervously around what they perceived as my main obstacles, should I choose to follow this impulse and attend the information session I had been telling them about. Namely, that I am of the incorrect ethnicity and that I do not have the necessary vocal capacity. Or, as they more succinctly put it “…but you’re white! And… you can’t sing!”

I assured them that, far from wishing to don a sparkly frock and belt out renditions of “When Will I See You Again” (although, in truth, this kind of appeals to me too)! I was merely responding to a call for “Creative People over 50” I had seen online. They were aghast! An online advert! Who knew what sort of dodgy elderly-exploiting niche might the daft old duck be getting herself involved in? They dutifully checked out the link on Creative Scotland and confidently informed me that it was all legit and above board and that I would be quite safe attending the information session at the CCA the following week.

And so it began.

Walking through the door of the CCA was actually quite hard. I knew that I fitted the criteria. I am indeed over 50 and I am a creative person – aren’t we all? But was I creative enough? To let you understand, I have a habit (a compulsion?) of writing everyone’s imagined back-story in my head within a nano-second of first clapping eyes on them. So when I arrived 45 mins early, due to the vagaries of train timetabling, and met Kim and Fiona who were naturally warm and welcoming, I attempted to distance myself from my negative feelings (that nagging voice in my head was telling me that I looked conspicuous, premature and a bit of a tube, although I was doing my best to present a confident and nonchalant facade). So, I observed the others in attendance as they removed coats and bags and struggled with their own insecurities. I am practised at this method of distraction, as I said it happens in a nano-second. My imagined lives of the others in attendance included; a fashion designer, a music journalist, two musicians, an inspirational art teacher, a Marianne Faithful lookalike, a racy continental jewel-thief, a stunt-woman and a nightclub torchsinger.

Everyone was clearly more creative than me!!! I was clearly an impostor!!! Surely I was about to be found out!! I was absolutely out of my depth in this glittering, talented company. I felt a bit like an elk that had somehow put on a leotard and had wandered into an Olympic gymnastics final – I must flee at the earliest possible opportunity before people realised that I was an elk and had no right to be there, attempting to pass myself off as a gymnast!

But what was this? My elk-in-a-leotard persona was speaking to people. People who seemed warm and spontaneous and interesting and encouraging. There was no time to think, it was a whirl of new and exciting information, laughter games and fun. No one suspected I was actually an elk who had wandered into the Olympics by mistake, or if they did – they did not mind a bit. It was a truly empowering experience. My wobbly elk-legs were holding up, getting stronger even. I began to feel brave. I attempted the theatre-company version of a triple Saluki (the empty chair game).

By the end of the session I felt tired but invigorated. There were people there who could not only speak my language, but who could teach me other ones as well! I decided to return to the next session.

And that was that, really. I was no longer an impostor, an elk in a leotard. The wildly creative others were indeed creative, but they were real people. And connecting with real people is what The Flames are all about. It was fantastic to be able to work with people from such a variety of backgrounds. The creative team, under the direction of Fiona (or Fiona the Fabulous, Warrior Queen of Dundee as my imagination calls her) are amazing. Patient, professional, gentle and encouraging. I have missed the weekly sessions and look forward to taking part in them again in Autumn.