The Houses and History in Partick East and Kelvindale 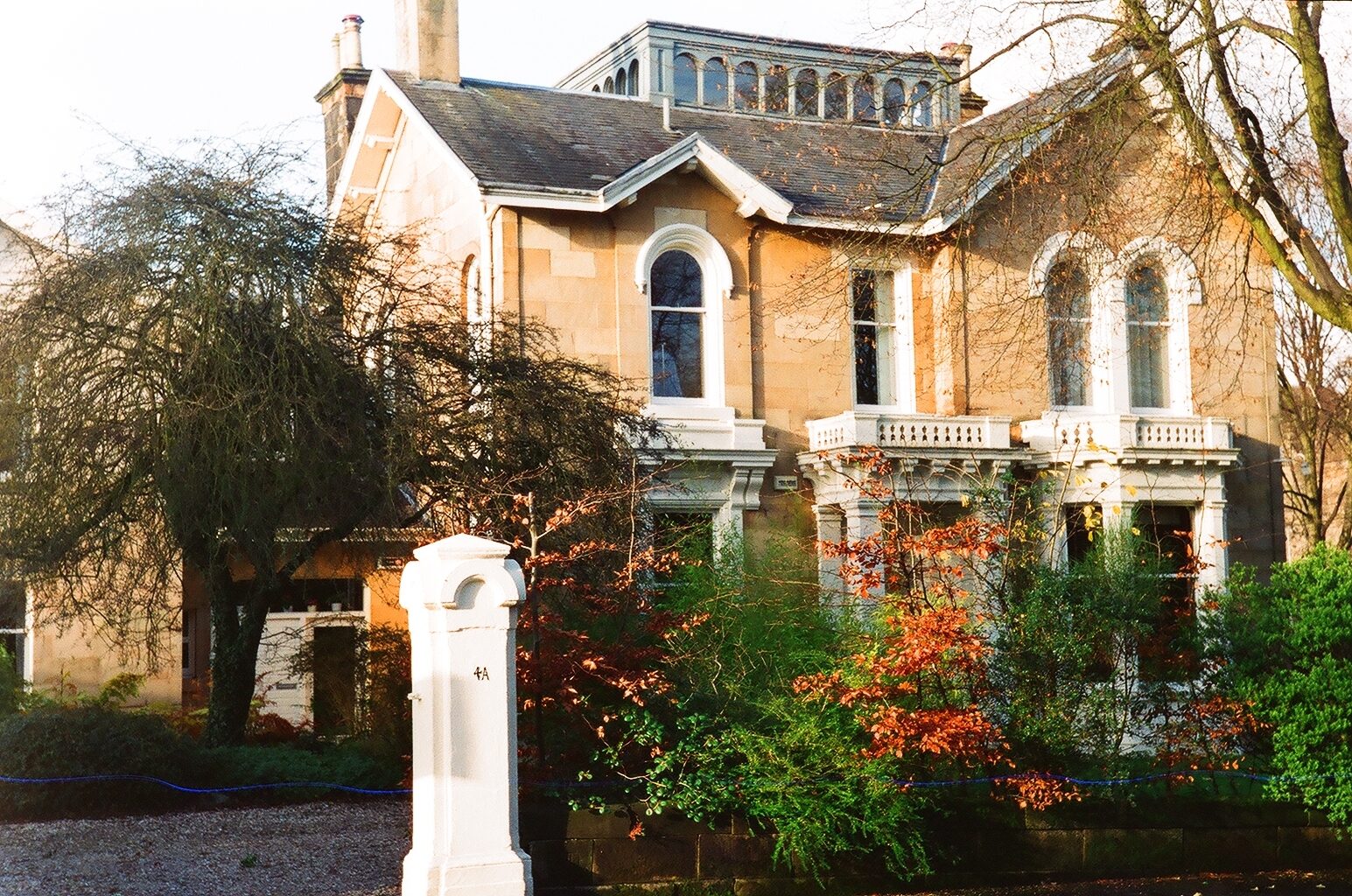 Nowadays, we say that “People Make Glasgow”– but, in the nineteenth century, it was shipbuilding and heavy industry that made the city. Glasgow grew rapidly during that period. But with the shipbuilding and heavy industry came a connection to slavery.  In the city centre, streets and buildings are named after the tobacco lords and industrialists who traded in the city. In recent years, the local authority has properly acknowledged Glasgow’s links to the slave trade. And many of these industrialists actually lived across Partick East and Kelvindale during the 19th Century. We caught up with local Community Councillor, Lionel Most, to learn more about the history behind the houses in Partick East and Kelvindale and this area’s ties to world-renowned industries as well as the American Civil War.

Located at 4 Sydenham Road, this house was formerly owned by James Smith. James Smith came from very small beginnings.  He started off as a tinsmith from an ordinary family, and he worked in a factory. Then, he went to New York and was inspired to make his fortune. After living there for a while, he came back to Glasgow and started up an iron works. The interesting thing about him – and this was not uncommon of other Glaswegians at the time – was that he became friendly with the Confederates during the American Civil War. The American Civil War was mainly about slavery: the Confederates wanted to retain slavery, and the Yankees in the north wanted to abolish it. The American Civil War started when the Confederates tried to secede (illegally) from the Union. Queen Victoria had stated that the UK was not getting involved in that war but secretly, the Scots were supplying ships, iron and so on to the Confederates. In fact, there was a shipyard on the Clyde that designed a special kind of boat which would have been used by the gun runners, the people in the South who acquired weapons from Third countries. These ships that the Scots built were able to move incredibly fast and could escape the Yankees chasing them. Through being able to do this, the Scots were able to charge a very high price! And James Smith of Benvue, although he wasn’t a ship builder, owned two iron works: one in Glasgow and one in Kentucky. Although he was supplying raw materials; he was neither supplying weapons nor ships.

James Smith became friendly with the Confederate government.  Jefferson Davis was the President of the Confederate States and went to prison after the American Civil War.  After this he visited Scotland, and, in fact, there is a famous picture of Jefferson Davis sitting outside Benview with James Smith and his family. Smith and men like him made their money on the back of slavery. Apparently the average life expectancy of female slave was around 37, and 35 for a male. While these lovely houses in Dowanhill were perhaps built from indirect slave profits, we should not be destroying them but I do think we should be telling people where the money came from.

Ayton House built in 1859, was owned by William Tod, who was a ship builder. In the 1850s his workers would have been very poor. At the turn of the twentieth century and onwards many of these shipworkers would have lived in the flats in Partick and many of these were small single ends or rooms and kitchens. Ayton House was bombed during the Second World War, severely damaging the roof. At that time there was a lack of building materials.  They had to ‘make do and mend’ and replace the original tiled sloping roof with a flat roof. Then, in the 1980s, a developer converted the house into flats. It is a tasteful and modern style now. There is a penthouse roof with balconies.

Richmond House in Linfern Road was demolished about 50 years ago.  It is now a telephone exchange. The whole street on the left-hand side is taken up with a telephone exchange. That area used to accommodate one house, with stables and grounds and outhouses. It was built, in the early 19th century by an iron founder called David Laidlaw. He lived there with his family. Given the rate of housing development in the west end, I would wager that it will be pulled down and be replaced by housing in the not too distant future

Hyndland was a tenanted farm before it was developed. Around 200 years ago, nearby Kelvinside and Dowanhill were landed estates with farmlands attached to them before they were developed. Hyndland wasn’t a particularly big area. Building started there in the late nineteenth century with Kingsborough Gardens, a substantial row of houses just behind the shops at Hyndland Road. Then, there was a recession and property prices fell and nothing really happened until the early 1900s, when the railway came. Once the railway came, Hyndland was developed.  Some of the flats there were small but others were fantastic, with five or six rooms. You used to be able to get a direct train to King’s Cross Station in London from the Station in Hyndland. You can imagine the people who lived in the big mansions leaving their houses, walking to this station to catch the train, doing their business in London over the following days, and then getting the train back to Hyndland a few days later.

If you walk to the foot of Clarence Drive and Novar Drive, there are smaller one-bedroom flats, but they all have bathrooms unlike some parts of the city where flats were built with outside toilets. At the northern end of these streets the tenements are far grander, bigger and much more expensive. And in some of these grander blocks there was a common telephone. You could have your own telephone (shared with neighbours). It would, I think, have been a payphone, one of those old-fashioned ones you see in the old black and white films, where they put one part to their ear and a mouthpiece by their chin. There are at least three of these boxes in various tenements in the area.  The telephone has been taken away, but the little box remains there. I don’t know what they use it for now.

Kelvinside is the area just north of Great Western Road. It was originally one of the landed estates. Someone who owned one of the big houses in Kelvinside was James Brown Montgomerie-Fleming. When I was young, I remember there was a law firm called Montgomerie-Fleming and Fyfe. They were connected to the owners of Kelvinside. Their biggest client was the Norwich Union Insurance Company. They had a very successful business, but then they were subsumed into another firm in the nineties. James Brown Montgomerie-Fleming owned the Kelvinside estate, and he sold parts off for the big terraces on Great Western Road, and also for plots for grand houses. He actually was not that successful in selling them off, but he himself lived in a beautiful house called Beaconsfield House, with the Italian tower on it. That became part of Westbourne School. The school has since sold it and it has been, like so many of the other houses in the area, converted to flats.

Summerlee was an ironworks in Coatbridge and is now a museum. The owner of Summerlee lived in Arnewood on Cleveden Road. It is very large and sits on the right-hand side of Cleveden Road walking north from Great Western Road. It has four or five storeys and looks like a castle! It used to be the home of one family, housing their servants also.  Again, it has been converted into flats.

In Lowther Terrace there are some beautiful terraced houses which were, I think, built around 100 years ago. The owners in this street have applied to the Local Authority to stop up the road in front of their houses to make the road private.  They have installed bollards at the entrance to the road only to allow residents and visitors’ vehicles.  They have also erected some tasteful Victorian lampposts containing a power point so that they can charge the battery in an electric vehicle.  This installation of charging points, is quite a forward-thinking piece of work!

Thank you to Lionel for this fascinating insight into the history behind the properties within Partick East and Kelvindale. If you would like to continue to learn about this area and the brilliant stories of the community who live here, take part in Round Our Place. Round Our Place is our immersive guided tour of Ward 23, where we have been Creative Communities: Artists in Residence 2021. Simply stop by The Alchemy Experiment on Byres Road to pick up a map (and a coffee!). Then, download the FREE Echoes app to your mobile device, find Round Our Place, plug in your earphones and start walking. More information can be found here.