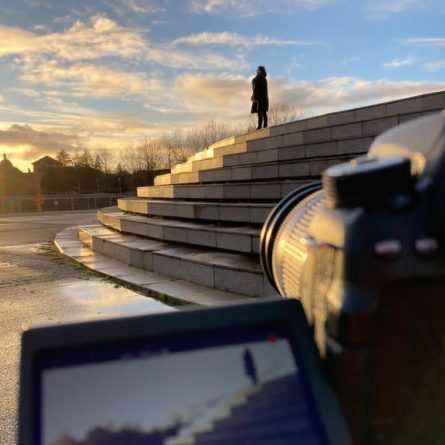 2020 was a hard year for so many of us – bringing uncertainty and obstacles unlike any we have experienced before. But, after almost a year of lockdowns and tough restrictions, making sacrifices to ensure the safety of ourselves and others, we’re one step closer to the finish line (FINALLY!). In light of all the challenges this pandemic has thrown at us, we stayed at home, we stayed resilient and we adapted to the situation.

If businesses are in a position where they’re still able to operate, they have to follow strict guidance and alter their typical working practices to ensure optimal safety for their employees and customers. At the moment, mainland Scotland is on full lockdown, so Tricky Hat and The Flames are staying at home under the latest government guidance. But, when restrictions were less severe, we were able to film The Flames from a social distance. Our main focus when developing our #DontStopTheFlames series was making sure that The Flames felt totally safe – whether they were filmed by us, or whether they filmed themselves in the sanctuary of their own homes. Keep reading to find out how we were able to create this series of films during the pandemic.

Planning was an absolute priority given the circumstances. We had to brainstorm, research, consult with the Tricky Hat board and plan extensively before any filming took place. Also, we worked very closely with staff at venues and locations to develop risk assessments before going ahead with any filming. In addition, our Associate Artist, Kim Beveridge, completed a Bectu training course on filming with Covid-19 protocols. These measures ensured that we were fully equipped with the correct knowledge and procedures before we started working with The Flames.

We filmed outdoors with The Flames during early Autumn, in the earlier stages of our #DontStopTheFlames project. We asked if any Flames would be interested in taking part in these outdoor sessions with us, and we arranged to meet with those who were keen. During these times, travelling outside of your NHS board area was permitted, which meant that we could safely go to the areas where our Flames lived and capture some material with them there. For example, we filmed Betty at Saltcoats beach for Umi and The Sea, and we were able to film several Flames at the serene Gartnavel Secret Garden for our latest film, Eden. We also visited and filmed Flames in their own gardens. Thankfully, the weather was surprisingly un-Scottish during our outdoor filming sessions and the pleasant conditions were definitely welcomed! It was also great to be able to safely catch-up with some of The Flames in person, having only worked with them through a screen since March.

The session at the Gartnavel Secret Garden was a particular favourite amongst Flames:

“What a perfect day. Real Flames faces at last! Great to see you all in a perfect setting”

“More Flaming fun in the Walled Garden today. Mirroring each other, site specific story-telling & just catching up with our own daily life stories. So lovely to see everyone for real!”

In October, we were able to hold one-on-one sessions with The Flames at the CCA in Glasgow. Again, Flames were asked if this was something they would be interested in, and those who were comfortable with an indoor session were invited along. Extensive coronavirus measures were in place during these sessions. Flames were filmed one at a time and were in the room with only one other person. In addition, each person in the room was separated by a Perspex screen. This protective barrier was cleaned down after every one-on-one session. Perspex screens are being used in the television and production industry to make scenes look more realistic for the viewers. By using these screens (and a lot of clever camera trickery), cast members are able to be within two metres of each other, meanwhile reducing the risk of possible virus transmission. EastEnders has reportedly been using Perspex screens to shoot kissing scenes – and you can’t even tell that there is a screen between the cast members!

With some Flames shielding as a result of Covid-19, it was important to us to ensure that this project was accessible to everyone. The Flames have been given iPads and training to film themselves from the comfort of their own homes. Each iPad is thoroughly sanitised and safely stored before being delivered to the next Flame. The Tricky Hat Core Team has also produced several tutorial videos for The Flames to follow along as they take the leap into technology, including how to record yourself on your phone and film yourself on your phone.

We have offered one-on-one and group workshops with The Flames on Zoom to talk about tasks, do fun activities together and keep that creative spark alive! Viv Gee and Scott Johnston have featured as guest artists and led group workshops on Zoom, which The Flames all really enjoyed. Additionally, Fiona has led group sessions with the HONO Flames and Scottish Flames, which gave all Flames the chance to get to know one another better:

“It is enchanting working with folk so far away. It is a new unfamiliar culture, but I think we have so much in common”

“They have become real people, with friendly faces, and ideas very similar to our own. The different language is no longer a barrier to a smile and a gesture”

Thank you so much to The Flames for getting involved with #DontStopTheFlames and for being brave enough to share your stories with the world.

We could not have achieved all this without Creative Scotland and British Council (facilitated by the Scottish Government), who funded this project. Creating a film series in the midst of a pandemic sure has its challenges, but their support and flexibility have been invaluable to us.

We have no idea when things will be “normal” again, but we have not let the pandemic stand in our way. The procedures we have followed when filming The Flames ensured that we were mitigating the risk of transmission, and it enabled us to keep working with The Flames. Working with these restrictions encouraged us to get more creative and think outside of the box when it comes to how we work. The obstacles this pandemic has thrown at us have pushed us to be more innovative and to develop new working practices which keep everyone as safe as possible. This period of time remains as uncertain as ever, but the new vaccines bring hope that better days are on their way.