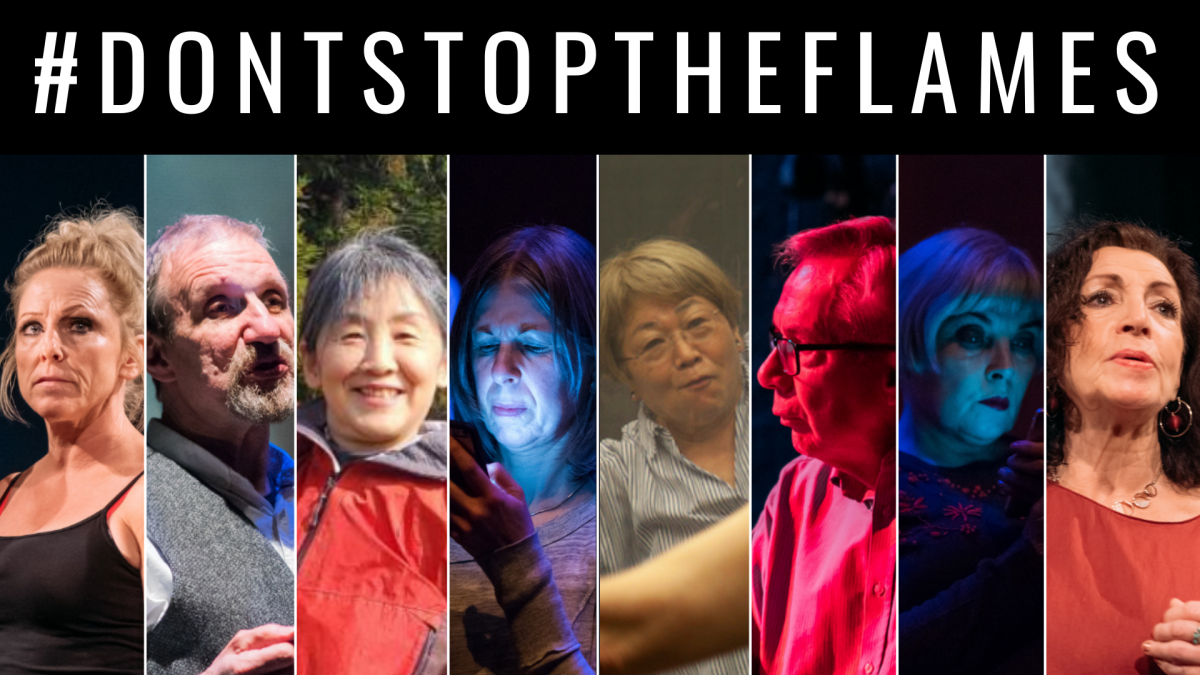 An update on our latest project, #DontStopTheFlames

Following cancelled performances in Scotland and Japan due to the coronavirus pandemic, The Flames launched a digital collaboration. #DontStopTheFlames

This pilot collaboration was a huge success; enabling Tricky Hat to keep the Scottish and Japanese Flames connected during a turbulent period. Tricky Hat and The Flames were able to create two short films: HOME and STAYING IN.

In September, The Flames reignited for a new collaborative project. #DontStopTheFlames took place virtually and in-person where possible. Flames across Scotland, Japan and New Zealand devised with Tricky Hat associate artists to create a series of eight films between September and March. Sharing The Flames’ raw, real experiences of life at the present moment, these films allowed The Flames to tell their stories about a new way of living and offered fresh insights into navigating through uncharted territory. The collaborative process, digitally or physically, allowed distinctive themes to emerge throughout the making of the series.

In addition, from Wednesday 21st – Saturday 24th October, The Flames were at the CCA for a residency. The Flames took part in workshops, with the new restrictions resulting in innovative ways of working. The Flames were filmed as they devised at a distance, with the shots filmed being used in some of the #DontStopTheFlames films.

#DontStopTheFlames is presented by Tricky Hat and The Flames. This project was supported by Creative Scotland and British Council, facilitated by Scottish Government. The project on the Japanese side was implemented by PLAY ART! SENDAI for the Sendai Cultural Programme 2020, and is co-sponsored by Sendai Cultural Foundation and Sendai City.

Betty is staying with Denise for a while. Betty likes a routine, tea, biscuits and Weetabix. She especially likes to iron. There isn’t much to iron at the moment, so the shirts come out every day, and are pressed, folded and put away. Betty also loves playing cards. Every night, she relearns the game they have been playing for 25 years…

The first film in our series, ‘Ironing with Betty,’ launched on Wednesday 30th September. Featuring one of our seasoned Flames, Denise, this film is a gentle exploration of living with her mum, Betty, who has dementia. Ironing with Betty was completely filmed by Denise herself, with support from Tricky Hat Associate Artist, Kim Beveridge.

“I went to the sea today and looked out at it.
I wanted to forget about that painful tsunami.
Today the sea was kind.”

‘海(Umi) and The Sea’ is the second of eight films being released by Tricky Hat and The Flames as part of their film series, #DontStopTheFlames. This film features several Flames from Japan and one Scottish Flame, Betty. Through sharing traditional Japanese and Scottish nautical folklore, weaving in the Selkie story and the emotional impact of the sea to the people of Sendai, The Flames each explore their unique connections to the sea. 海(Umi) and The Sea launched on Friday 30th October and is subtitled in English and Japanese.

‘”Unprecedented”‘ is the third instalment in the eight-part #DontStopTheFlames film series by Tricky Hat and The Flames. As stand up performers in empty auditoriums, Flames from Scotland and Japan share stories of extremes: love and anger, compassion and control, living and dying. Sharp contrasts are intensified in unprecedented times. Burst balloons, burst bubbles… Are we laughing in the right places? “Unprecedented” launched on Friday 4th December and is subtitled in English and Japanese.

Roses is the fourth of eight films being released by Tricky Hat and The Flames. Do you have any walking rituals? The Flames are discovering that they’re walking a lot more than usual since lockdown. Pene, Jay and Anne share the rituals that spur them on. Join them for a friendly blether about what helps them to get their steps in – counting patterns, a walking stick or eating a Roses chocolate every 3,000 steps! Roses launched on Friday 18th December and is subtitled in Japanese.

“In here, it is almost possible to convince yourself that all is right with the world.
I’ll follow the rhythms I know. Planting, growing, surrendering to the seasons and relishing the delights each one brings.”

Eden is the fifth of eight films being released by Tricky Hat and The Flames as part of their latest film series, #DontStopTheFlames.

Eden was filmed entirely in different gardens, including the idyllic Gartnavel Secret Garden in Glasgow’s West End. With beautiful surroundings and snooping neighbours, this film explores stories of escapism.

Is This Me? is the sixth of eight films being released by Tricky Hat and The Flames for their digital collaboration, #DontStopTheFlames. The Flames have been taking a long look at themselves: are they who they expected to be, or are they content with how others see them? Perhaps they are following their hearts and navigating a new route through their lives… In this time of reimagining, The Flames look at who they are and how they fit into the lives they have now.

Resilience is the penultimate film in the #DontStopTheFlames series. This film features tales of indoor resilience – captured and told by The Flames. Flames from Scotland, Japan and New Zealand share stories of how they faced conflicts, secrets and falling to bits. And how they found their way to happiness, feeling the wind behind them… Resilience is entirely self-filmed, and skilfully performed. The Flames were given guidance on “Domestic Noir” lighting and captured their footage on their own devices at home – with outstanding results. This was brilliantly complemented by Mick Slaven’s atonal compositions.

Of all the limitations the pandemic has brought to our lives, it’s hugging we miss the most. We long to hug our families and friends, that close human contact that says so much more than words.

It’s not surprising that the last film in the #DontStopTheFlames project is about hugging – or the lack of it. This film is in 2 parts.

HUG uses choreography to explore the lack of human connection, and the conflict between the desire to keep our loved ones close and the need to keep them at a social distance. Filmed in unusually quiet urban settings – outside the Science Centre in Glasgow and the Library in Sendai, Japan – it features a powerful soundscape, created using The Flames’ voices.

HUG ME was filmed by The Flames themselves, in Scotland and Japan. As well as demonstrating their digital upskilling, The Flames offer their own unique interpretations of human contact in recent times.