Fiona Miller is the Artistic Director of Tricky Hat Productions and the Director of The Flames. We had a quick catch up with her about her recent trip to Sendai in Japan, where she was delivering an information session about the upcoming 炎:Honō:Flames performance which will take place in Sendai on Sunday 12thApril 2020.

In this project, the performers will explore the theme of tsunami: from a personal perspective and from the experiences of local people in the Sendai area. This project is supported by the British Council and Creative Scotland partnership as part of ‘UK in Japan 2019-20’, which is a joint initiative by the British Council and the British Embassy Tokyo to highlight the breadth of the UK’s relationship with Japan. Daiwa Anglo-Japanese Foundation and The Great Britain Sasakawa Foundation are also supporting the project.

Read all about it below:

What brought you to Sendai?

We visited different parts of Japan but chose to go to Sendai because it felt the most similar to Scotland. The trip before this one was made due to the connections we had in the area. Sendai was affected by the Great Eastern Japan Earthquake and Tsunami of 2011. So, as a result of this, many grassroots area projects came to life in the Sendai area. Over there, people were excited by similar types of collaborative projects and making human connections.

We got funding from the British Council and Creative Scotland in 2018 to go to Japan, following on from our first trip in 2017, with the Tricky Hat core team so that we could meet people, make contacts, and see if there were any possible collaborations. We wanted to see if people might be interested in this kind of thing. Typically, people don’t do this in Japan – they don’t devise theatre in this way. So, we travelled about lots of places and, when we were in Sendai, we met LondonPANDA Theatre Company. They’re quite young and quite new but we got on really well with them and thought they would be a really good fit, so we asked them if they would be interested and they said yes. And they’ve totally embraced this. Alongside some other collaborators with their partners, they have created an organisation called ‘Play Art Sendai’ to support this project and they will now take this kind of work forward within Sendai. So, it’s all really exciting: it’s really exciting for them and really exciting for us. We’ve had an overwhelmingly positive response from people; including the theatre that we’re going to be performing in and the Sendai Cultural Fund. It’s all big partnerships supporting and carrying the project forward, which is amazing.

This latest trip was an information session and we hit the maximum number of participants after only two days of advertising it!

What sort of process did you follow with the participants over there?

We followed the exact same process as we do here in Scotland. We want to show them just how accessible it is to do this. We’ll come up with questions and they’ll come up with a sentence, which makes it easy as everything is organic. It’s the exact same as it is here in Scotland, with similar responses, too. The only real change is that the responses are delivered in a different language. So, for example, we asked about risks that they’ve taken in their lives: what they think a risk is, or risks that they want to take. Some people talked about personal things – conflict they had in their lives, their families. A woman talked about how she’s become a hip-hop dancer in her seventies. You could tell a lot about how people were speaking that it was really personal to them, you could read it off their face and their body language. It was amazing, and we were overwhelmed by people who wanted to be a part of this project, but we could only take on twelve Japanese participants. Including our Scottish Flames, there will be 15 performers in total. People there were so excited by it, it was amazing!

For the performance, the story comes from the performers themselves, and I just do very simple exercises where together we chose when they tell their bit of the story and we all start to create an ensemble performance. We do all this very quickly! And they all start to go “Oh… I can do this – this is easy! No one’s asking me to act. No one’s asking me any difficult questions. I can say as much as I want to. I can say it when I want to.” And we shape it into a short performance. So, it will be exactly the same as we do here. It’s devised, and we follow a structure, and people’s ideas and stories colour in that structure. It’s like a jigsaw. They colour their bit in themselves.

How was your visit?

It was an amazing experience. I couldn’t have imagined what would’ve came from it. Although there are collaborative projects taking place in Japan, they don’t devise theatre like this over there. Japanese people are shy and humble, but, when given the permission to talk about their life, they are unstoppable.

I just got how brilliantly generous the people were who participated with their stories. They were joining in and trusting each other; trusting us and trusting me. We get the same reaction here in Scotland. What that tells me is that people have got something to say that they want other people to hear, and that you can take this anywhere. People are people and they want to communicate – they want to join in with other people and they want to put their head above the parapet in their lives now. That’s symptomatic of being fifty and over: you actually don’t care as much. Although there’s more social constrictions on people in Japan than there are here in Scotland because of the culture, they want others to know that they’ve got something to say. They want to try this out, they want to do something new for themselves, and they want to create this movement with this family of other people that they’re working with. That’s what happens with this process.

Starting the conversation over in Sendai about what this is was really powerful for me. There was a risk element, as I had no idea what would happen when we were over there, but I’m thrilled with the outcome. All people have something to say. It doesn’t matter where you go, you can apply this process and take it anywhere in the world. The participants and all those we met in Japan were brilliantly generous people; putting their trust in the team. This allowed them to do something new for themselves.

There’s clearly a need for devised performances like this, because – after only two days of advertising – there were thirty people interested and we had to close the list! I did a presentation the first day I was in Sendai, talking to all the partners about what it is, because part of my trip was to start the conversation about what this is, and in Japan it’s better to do things face to face. One woman came to that because the list was closed by that point and she couldn’t come to the information session. So, afterwards, I invited her to come along to the information session because someone had cancelled, and she started crying because she got the opportunity to come along – it was amazing. It really means something, and it was really powerful for me to go and to see that response because you don’t know what’s going to happen until you ask the questions.

After your trip, what are you most looking forward to for the upcoming 炎:Honō:Flames performance?

I’m really looking forward to just hitting the ground running and getting straight in. I really think we can get straight into the heart of creating something. We don’t have to do a slow build up, we can just go straight into it. I think taking three Flames from Scotland who have done it before means that a lot of worry about how this process works gets taken away because they’ve done it before, and they can reassure the new performers that this process works. They might not understand it now, but they will at the end when it all comes together! So, I’m so interested in that. I’m also interested in cultural richness, the Japanese cultural richness, and how we explore that as well in terms of performance. I’m also excited about sharing a vision of the future and what it means to be older both in Scotland and in Japan. What does that mean right now? I’m really interested in comparing and contrasting the two countries in that respect. There will be lots of things that are similar, but I think they’ll be different because culturally you don’t speak about certain things in Japan. The level of respect and space that people give each other is quite different from here. Interestingly, it was mostly women who came along to the information session, with a few men, which is similar to how it is here in Scotland as well. It’s fascinating, because for somewhere which has a very different culture from ours, you expect more differences. But I think that because we’re asking people to connect on a really human level, and making that into performance, we’re not asking them to pretend to be anybody other than themselves. I think that offers a really brilliant opportunity, especially in a culture where you have to conform a lot. Everyone’s got a voice, everybody’s got something to say, everybody wants to be seen – it’s just what level you hit that at. Although there might be cultural differences, underneath that surface, we’re all living in the 21stCentury. At the end of the day, we’re all human beings and I think that right now is the right time to make those human connections. Cultural diplomacy is so important and I think that Scotland can really make those connections happen. Our culture is so widely recognised and we export it everywhere we go. 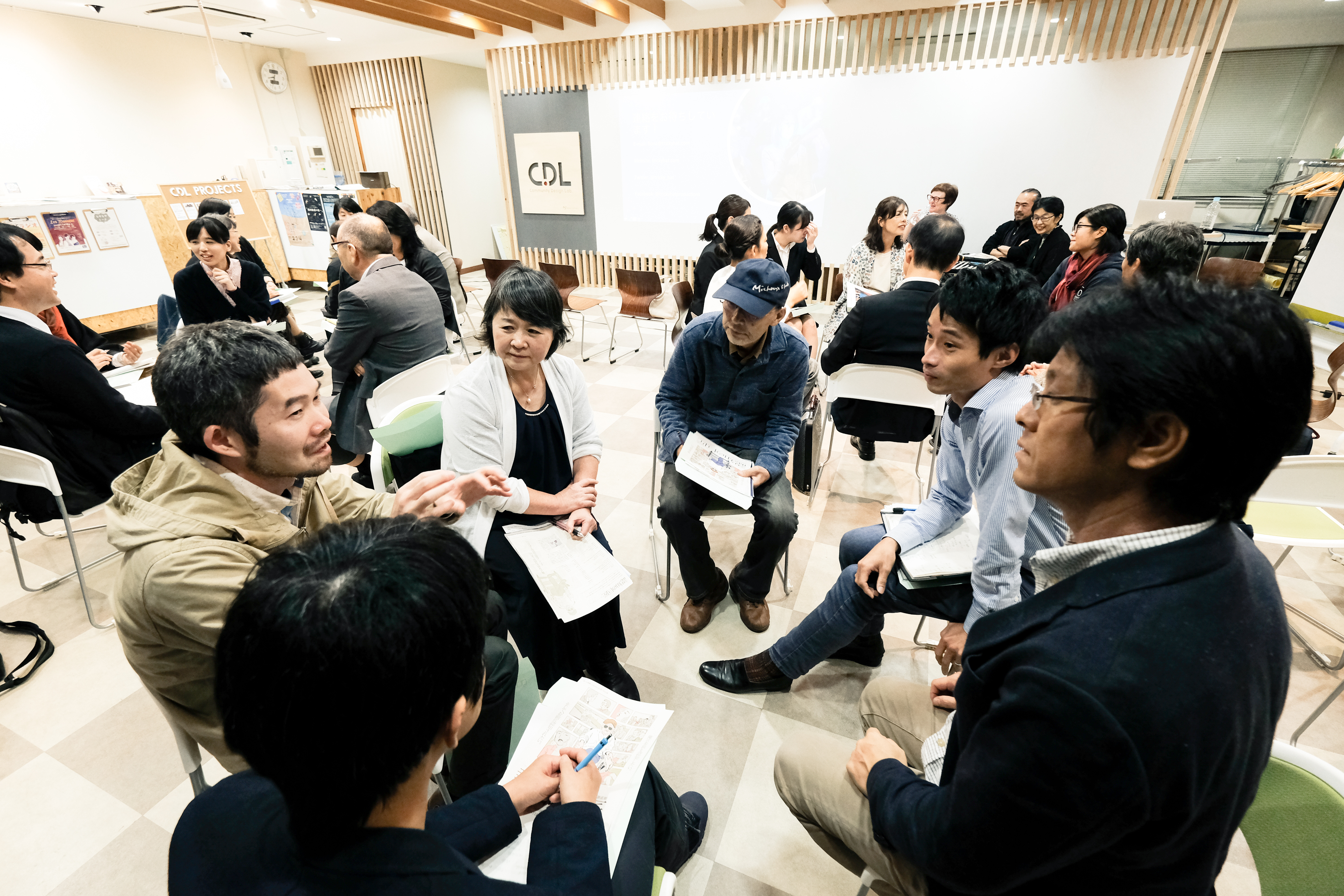